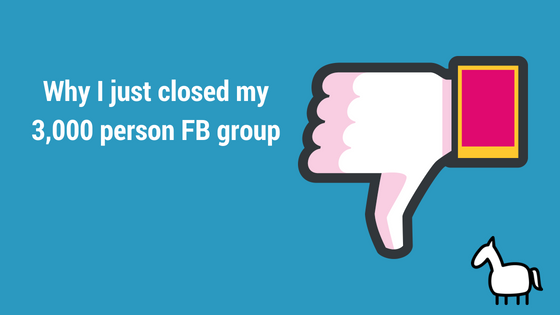 Do you ever overthink a decision? 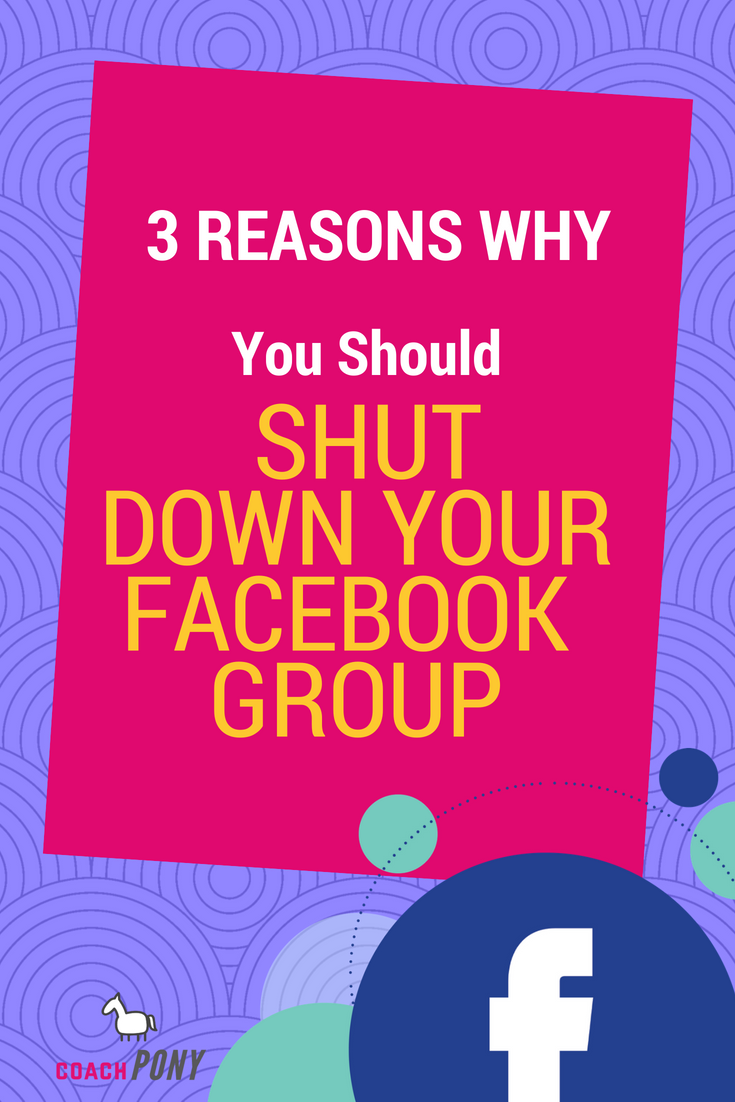 Agonize about it, going back and forth while you anxiously chew your nails or think about eating more chocolate?

My latest business decision involves what I like to call “Annoying Uncle Matthew” (i.e., a relative we can’t get rid of even though we desperately do not like him), and you might call “Facebook.”

It’s a place to meet up with other entrepreneurs who love coaching, and focus on the business side of what we do. I share things in there every week to help move you along.

And as of now, it’s archived.

Yep. After much debate I finally pulled the plug.

Seems *kind of* crazy, right? I’ve invested some time and money into growing this small-but-mighty group, why would I shut it down?

Reason #1 on why I shut down my free Facebook Group: It’s not my main marketing platform

So, if you don’t know about platforms I talk all about them in this helpful free guide on how to make money as a coach (download it here).

And for me, Facebook Groups are NOT my main marketing platform.

That means that it’s not my preferred method for marketing my business. It doesn’t work best with my style of communication right now.

I LOVE it for pure teaching and sharing, which is why all of my premium paid programs have their own Facebook groups in which I love participating.

But the free group is different.

I set up it up off-handedly several years ago to test out marketing platforms and have some fun (this is why I’m here, to test things out for you!). For the most part, it’s grown organically with little effort from me. Again, not my main platform so I didn’t put time into growing it.

But even so, I found it was causing me anxiety to manage and seeping away my focus from other, much more productive, ways for me to share about Coach Pony and this awesome community.

The Pareto Principle, otherwise known as the 80/20 rule, applies to marketing as well as to everything else: 80% of your clients will come from 20% of your marketing efforts. It’s important to figure out what that 20% is, and then expand it.

What that means for me is good and bad. I also want you to be on Facebook if I’m there, as that is a way to reach you and have fun discussions and interactions outside of email or blogging.

But it hurts my business if you don’t ever see anything I’ve posted. Or if it costs an arm and a leg to even get in front of your tired eyes.

In fact, companies like mine, who aren’t friends with you and therefore aren’t posting photos of our last Thanksgiving together, aren’t going to show up in your news feed. Even if you like our page or follow us.

This is true for two reasons:

So, over the last few years Facebook keeps restricting my organic reach, and making me pay more and more and more to even get seen by you. First it happened to fan pages, and now it’s decimating groups.

Case in point: In my group we have thousands of people. Yet over time it was like pulling teeth to get people to engage. There are several reasons why this can be:

A year ago, I had tons of posts that had at least 20-40 engagements, likes, comments, etc. I felt reasonably good about that, people were engaged in my group, right?

So a post that has engagement still can’t get seen? FRUSTRATING.

Then it got worse. I posted content I absolutely knew was helpful, visually interesting, and engaging (this is not my first rodeo) and received no comments or likes.

And I realized that Facebook stopped showing most of my posts to anyone, regardless of the post.

So now I’ve got a group that won’t show you anything, can’t reach anyone, and has no engagement for the above two reasons.

Hmmmm…I wasn’t ready to give up yet. I was super annoyed, but I had two other options to explore…

Reason #3 on why I shut down my free Facebook Group: Events and Group Messenger are worthless for reach right now

I regularly invite my group to webinars and OF COURSE Facebook will only allow me and the Coach Pony team to invite up to 250 people.

But also, not really.

If you invite too many people at the same time, it will block your ability to invite anyone.

So, for my last webinar I went through the group and patiently invited small groups of folks to join, so as not to trigger Facebook.

It was as if no one had even seen the invite (I’m pretty sure almost no one saw the invite).

And so I turned to messenger within the group.

These people were in my group, they’d ask to join, they can leave at any time, so it seems fair that I should be allowed to message them at least once. Keep in mind that they have to still accept the message from me before getting it. So, there’s still a lot of protection built in for my group members, and therefore it should work, right?

I pulled the team in and we sent individually crafted messages to about 50 people and got blocked right after that. *sigh*

Reason #4: Free groups are passe, and free is always a problem

Listen, 3 years ago Facebook groups were all the rage. You could build a huge one and have tons of organic reach in your group easily.

Now, most people are members of upwards of 20 groups (some upwards of 200) and no one is paying attention to any of them.

Heck, as a consumer myself I’m not even paying attention to some groups I’ve paid to join, much less my free ones.

We just don’t value free stuff the same way we value what we pay for.

(Here’s a blog on why free is bad for business, in fact!)

So, separate from all of the ways in which Facebook has made my life hard, I also think that people are kind of over Facebook, and Facebook groups, for the most part.

Sure, some people are having success with them, but it requires a level of commitment (and some luck) and I’m just not interested because…Facebook Groups are not my marketing platform :). Actually, Facebook itself isn’t either, though I still use it to some degree as a secondary marketing platform.

By the way: The reason my premium paid groups are so successful, in my mind, is that 1) People have paid to get in, so they want to participate and 2) They are all talking about the same thing, like the steps in my Build a REAL Business program and finally 3) They trust me. They’ve bought into BARB and they trust me and want to play.

Here’s the bottom line to sum up why I shut it down for now, and why you might want to think about not starting one either.

But also don’t feel bad about saying “no” and doing something else.

My Facebook Group was only a few thousand compared to the tens of thousands in the Coach Pony community, and I make plenty of money so I’m doing fine.

Still need help with that platform thing I mentioned? Of course you do!

Why not get our help to figure out your marketing platform in a FREE on-demand webinar all about how to market your coaching business. GO HERE TO GRAB YOUR SEAT!

We helpfully call it the Marketing Masterclass, and we’ll break down the 5 marketing mistakes you may  be making RIGHT NOW + how to solve them.

And none of the solves involve starting a FB group or hiring a social media manager :). 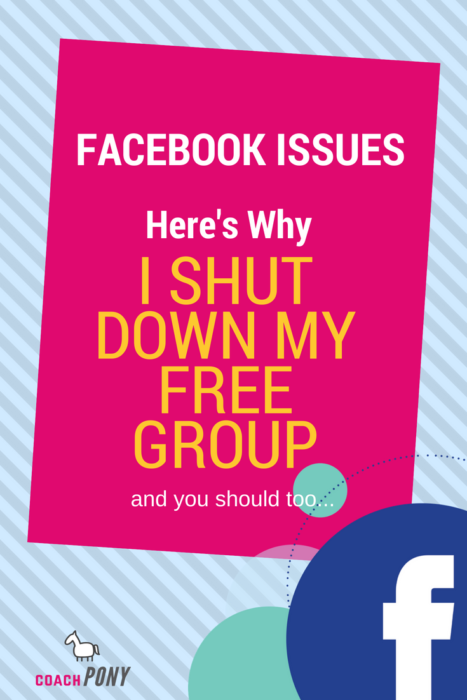